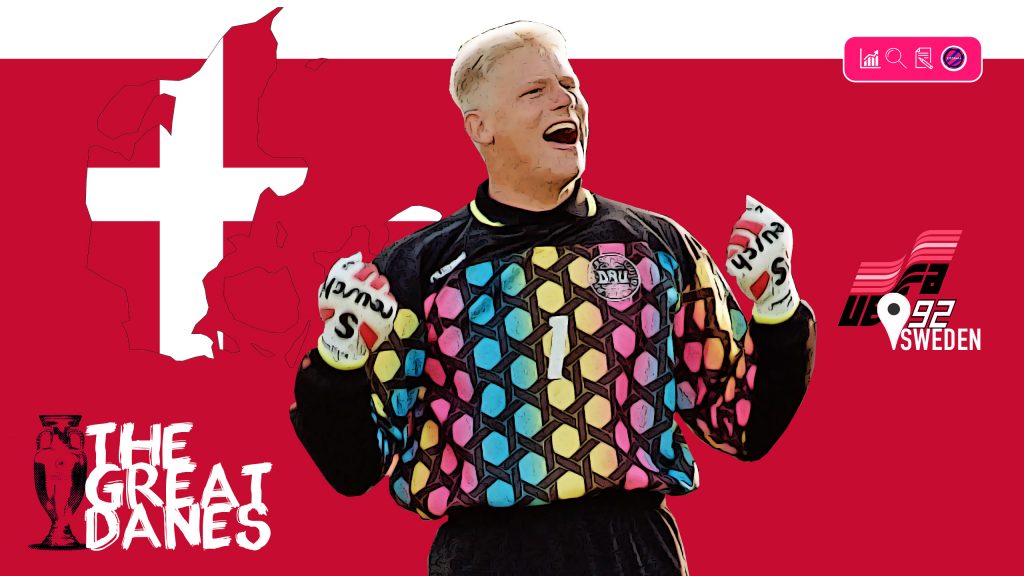 Denmark, the Euros, and a spirited journey by Louis Moore – @louisjohnmoore

There have been many underdog stories in the modern football era. Leicester winning the Premier League, Porto clinching the Champions League in 2004 and Greece lifting the Euros in the same year are all well-documented success stories. Yet, there is one scintillating football tale which rarely gets a mention. Well, Denmark managed to win the Euros back in ’92 while failing to qualify for the competition.

Sounds ridiculous, right? The super Scandinavians who fielded a somewhat unknown squad managed, to qualify as Yugoslavia received a ban from the competition, due to an ongoing civil war in south-eastern Europe. Denmark thought they would be watching the competition from their armchairs but were granted admission to the tournament. Nonetheless, they had one week to prepare.

Extraordinarily, even the Danes kit sponsors, Hummel, were not prepared for the red and white dynamites involvement in Euro ’92. Peter Schmeichel recalls in an interview with UEFA magazine that the national team were handed the U21’s kit which was uncomfortably tight. The great Dane stands at 6 ft 2 and remembers struggling to dive around in the skin-tight tops.

Is there anything more that could make this narrative even more impressive? You bet.

What makes this story more compelling is that Michael Laudrup, one of the most decorated Danish footballers of all time, quit the squad during their qualification campaign. Laudrup believed the team’s style of play did not fit his footballing prowess.

At the time Laudrup was one of the most influential players on the planet, guiding Barcelona to the La Liga and Champions League cup double, in the same year. Adding insult to injury, his suave brother Brian and indispensable left-back Jan Heintze both decided to leave with Michael, due to not believing in then Manager Møller-Nielsen’s philosophy.

Nevertheless, when the Danes scraped qualification, Møller-Nielsen called both brothers. Brian decided he would go with the squad while Michael opted out.

In an interview with the BBC Brian Laudrup spoke of how he gave Denmark no chance of competing at Euro ’92:

‘I got the call; report tomorrow in Copenhagen, we’ve got a week to prepare. I was like we haven’t got a chance. We all got to the pitch, and Richard Møller-Nielsen was there, and he told us all to believe we were going to win it in Sweden, and we all started laughing. But I think at that very moment he laid down the dreams and thoughts that we could actually go and do the impossible.’

The group of death for Denmark

Entering the competition as the lowest-seeded nation, Denmark were placed in a group of death where France, England and Sweden were there opponents. The Danes were less than delightful on the eye and managed to scrape a 0-0 draw against England in their first game. In the second game they dominated hosts Sweden but were defeated 1-0. Going into the crunch match against the more fancied French side, Denmark had a slim chance of qualification.

Admittedly, the France Euro ’92 side were not up to much. Yet, players such as Eric Cantona, Emmanuel Petit, Didier Deschamps, and Laurent Blanc made up a strong spine. Not to mention, their national hero Michel Platini was manager.

Somehow Denmark scraped a 2-1 victory over Les Bleus, where goals from Lars Elstrup and Henrik Larsen (not the Celtic legend) shocked everyone in the tournament. With results going their way, Denmark got through to the knockout stages by a point, finishing runners up to Sweden. Unsurprisingly, England finished bottom after failing to win a game.

The euros have certainly evolved since 1992, where now 24 teams participate in the finals. Albeit, when the Danish won the tournament, there were a measly eight teams in the competition. The big boys at the time, Holland and Germany, were eager to grip the trophy. Denmark drew group two winners and favourites for the competition, Holland. The Dutch side were one of the most talented teams to enter the tournament, and possessed a plethora of talent. Van Basten, Ruud Gullit, Frank Rijkaard, Dennis Bergkamp, and Ronald Koeman were just a few of the superstars on the team sheet.

Many expected a Germany vs Holland goal fest in the final. No one predicted the outcome of this game. The Danes frustrated the Dutch by tackling hard and hitting consistently on the counter-attack. Not to mention, Denmark had arguably the best keeper in the world in Peter Schmeichel, who single-handedly kept the Scandinavian’s in the game.

The Dane’s rapturous elation was soon squandered as they knew that their biggest test was yet to come. They didn’t have the best players but had secret confidence that their team was composed and well drilled. The Germans, however, had other thoughts and their compelling semi-final victory against hosts Sweden put the fire in their belly to thrash the underdogs.

Just like fans across the world, the European powerhouses underestimated the small Scandinavian country.

Germany headed into the final as world champions and were major favourites to do the World and European double. Their ranks included Jurgen Klinsman, Karl-Heinz Riedle and Thomas Hassler. The Germans dominated throughout. Yet again, class-act Peter Schmeichel kept the game at 0-0, following shots at goal by Karl-Heinz Riedle, Stefan Reuter and Guido Buchwald in the first few minutes.

Sir Alex had unearthed a gem in Schmeichel the season before, snatching him from Brøndby for £500,000. Ferguson described the transfer as ‘the bargain of the century’ in 2000. Schmeichel later admitted that the Dane’s success in euro ’92 propelled his career, giving him the belief that he would win copious amounts of silverware at United. He did just that.

The counter is productive

Denmark soaked up the pressure throughout the final and successfully stuck to their counter-attacking game plan. The Germans were dumbfounded when John Jensen fired the Dane’s into the lead after eighteen minutes.

Denmark managed to contain Germany who were deeply frustrated to be going into the first-half interval 1-0 down. After the second half, Germany threw the kitchen sink at Denmark, which played into the hands of the Scandinavians. The world champions tired quickly after their hard fought 3-2 semi-final victory against Sweden.

With a perfect defensive performance, Denmark hit Germany on the break and shocked the world when Kim Vilfort broke away from midfield, eluded the challenges of two defenders and drilled the ball into the bottom right-hand corner. The Kaisers dethroned. Eleven men in white slumped in stature and knew their time as champions had been foiled by the team that should have never qualified.

The final whistle blew. The Danish bench poured onto the pitch to congratulate their teammates. A sea of red shirts engulfed the white. Victory was accomplished, eclipsing any achievement in Denmark’s history. Still to this day, that Euro ’92 victory made the footballing world take note of the talent harboured in the Northern European country.

Amongst Denmark’s starting eleven, ten of the unknown superstars had played for Brøndby. The year before the Euro ’92 triumph Brøndby made it to the UEFA cup semi-final, where they were unfortunately dumped out by Roma 2-1. However, to this day, that is the most successful European cup run a Danish club has managed.

Furthermore, the Brøndby side who nurtured the likes of Schmeichel had played together throughout the youth ranks. This created an unrivalled team spirit, where the men on the pitch were willing to die for the shirt.

The future of Denmark and Danish football

Most recently, talent has increased in the Dane’s football side, where they regularly qualify for big tournaments. Most notably, the 2021 Euro finals. Since Euro ’92, Denmark has continued to punch above their weight, where they made the world cup quarter-final in 1998 and the knockout stages in 2002 and 2018.

Denmark continues to produce players who apply their trade in the top European leagues. Christian Eriksen, Martin Braithwaite, Andreas Christensen, Thomas Delaney, Pierre-Emile Hojberg, Phillip Billing and Kasper Schmeichel will give any of the top teams a competitive game in next year’s Euro competition.

Could the red and white dynamite be the dark horses of the competition?

Unfortunately, the most successful Danish football manager of all time died in February 2014. In 2015 a film was released in tribute to Møller-Nielsen called Someren ’92. The narrative shows how respected Møller-Nielsen was in Denmark after the nation’s triumph in ’92. Someren ’92 is available on Netflix, translated as Summer ’92.

In his interview with UEFA, Peter Schmeichel implores that the footballing community watches Sommeren ’92, so that Møller-Nielsen’s name lives on.

Denmark’s success in Euro ’92 is often lost in footballing folklore. With all the odds against them and missing their talisman, should we give this narrative the respect it deserves?

Euro ’92 was the year that a nation of five million failed to qualify for a tournament, but managed to imprint their story in the history of football.